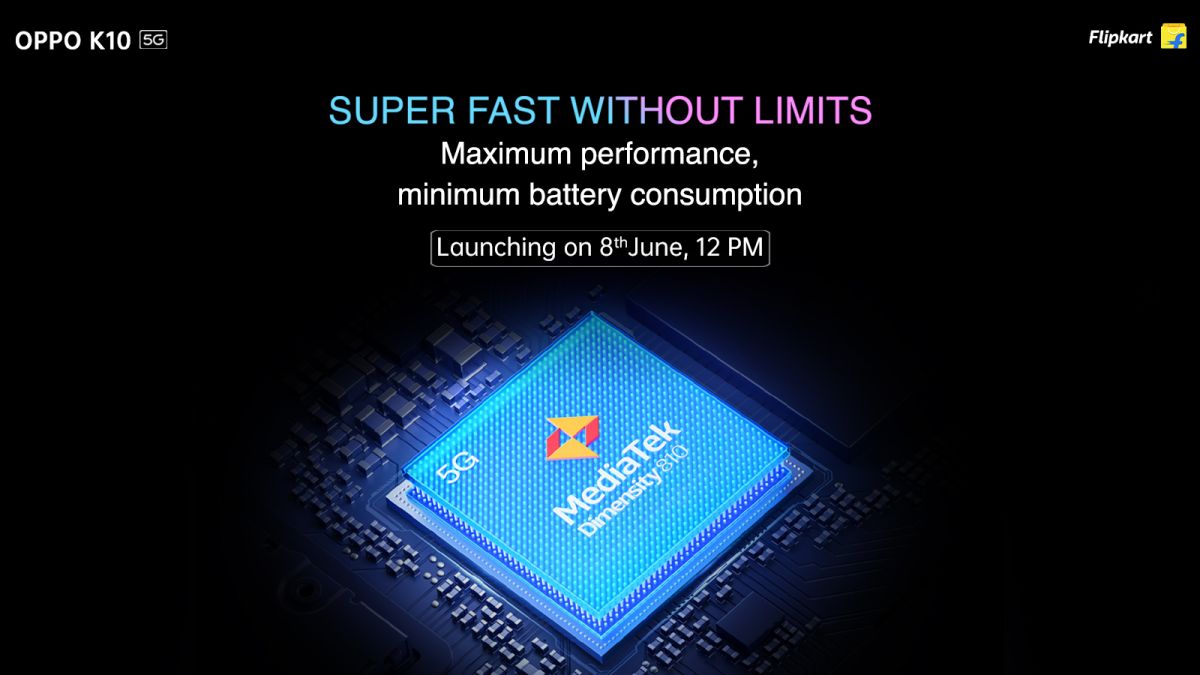 Oppo K10 5G has been confirmed to be powered by the MediaTek Dimensity 810 SoC in India. A Flipkart microsite for the smartphone had recently gone live, soon after which, the company officially confirmed that the smartphone will launch on June 8 in India. From previous tips, it is expected that the successor to the Oppo K10 will be featuring a 6.56-inch touchscreen with HD+ resolution and 90Hz refresh rate. It is also said to come with Android 12 out-of-the-box. The smartphone had launched in China in April with the MediaTek Dimensity 8000-Max SoC.

The Flipkart microsite of the soon-to-be-launched smartphone had also recently gone live. Oppo has recently announced through a tweet that the smartphone will launch on June 8 at 12pm in India on Flipkart. In another tweet, the company also said that the Oppo K10 5G will come with an ultra-slim design and Oppo Glow colour for a glossy back.

According to a recent report, Oppo K10 5G has been tipped to feature a 6.56-inch touchscreen with 90Hz refresh rate. The successor to the Oppo K10 is expected to come with 8GB of RAM and 128GB UFS 2.2 storage. The Oppo K10 5G in India may come with Android 12 out-of-the-box. It is said to get a 48-megapixel primary rear camera and a 2-megapixel depth sensor. At the front, it is expected to come with an 8-megapixel selfie camera. The smartphone may get a 5,000mAh battery with 33W fast charging support. It is also expected to feature a side-mounted finger print sensor and dual-speaker setup.

Oppo K10 5G was launched in China in April this year. The smartphone featured a 6.59-inch touchscreen with 1,080×2,412 resolution. It was equipped with a triple rear camera setup with a 64-megapixel primary camera, an 8-megapixel sensor, and a 2-megapixel sensor. The phone also came with Android 12.